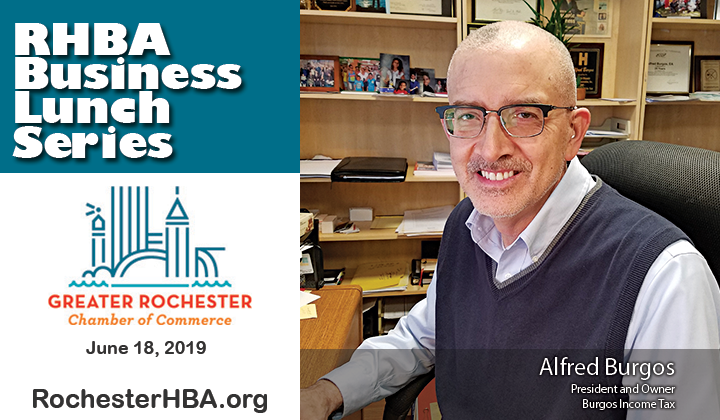 Join us at the Greater Rochester Chamber of Commerce for our June Business lunch event featuring Al Burgos!

Topic: How the new tax law has affected average Americans

Alfred started BURGOS Income Tax in 1991. That same year he started a volunteer tax service (VITA) with the support of the IRS, to assist low-income taxpayers. He ran that program for seven years at the offices of PRYD. This would not be the only community project he would spearhead.

He is the Sponsor and the Director of the Puerto Rican Festival’s Domino Tournament which has been one of the high-lights of the festival for the past fifteen years.
He is also a Sponsor and Race Director of the Puerto Rican Festival’s Javier Memorial 5K Race and Walk which is entering it’s 10th year in 2019.
He was the past President and past Board member of the Rochester Hispanic Youth Baseball League.

By 1998 with a client base of 400, Alfred decided to move his home based office and leased his first commercial office. Over the years he had various locations around the city of Rochester and currently has a client base over 1300, owns two commercial locations, and employs 15 individuals during the tax season.

Alfred has always had a strong commitment to community service. This is a short list of some of his awards.

You can make your reservation(s) and pay with credit card for this Business Lunch by filling in the following form: