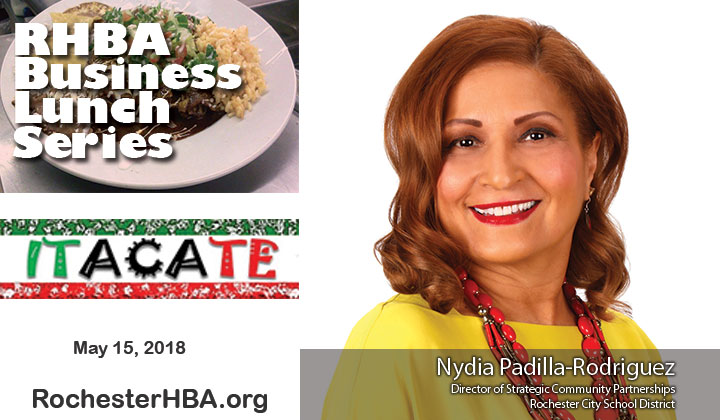 Join us at Itacate-Penfield Restaurant for our May Lunch featuring Nydia Padilla-Rodriguez! 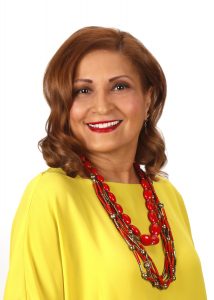 Mrs. Padilla-Rodriguez is the Director of Strategic Community Partnerships for the Rochester City School District. During her 25+year career in education and dance she has worked with thousands of youth to create and help them gain access to life-building opportunities in the arts, academics, culture and leadership development.

Creating and advocating for opportunities are skills she developed while growing up as the middle child in a family of 10 children. Nydia acquired her Master in Educational Administration, Master of Science in Education and Bachelors of Arts degrees in Elementary Education and Dance at Brockport State University.

While attending high school, Mrs. Padilla-Rodriguez earned a position as one of the original members of the Bottom of the Bucket But Dance, now world renowned Garth Fagan Dance Company.

She is a firm believer in leadership by example as she has an extensive list of both professional and community accomplishments:

A resident performing ensemble at the David Hochstein School of Music and Dance, Borinquen has performed thousands of times throughout New York State and Canada since 1981. Concerned about the high dropout rate of Hispanic youth, she crafted an environment that nurtured young people in developing their self-esteem, confidence and academic skills, requiring that students must maintain a “C+” average in school to remain as members of Borinquen Dance. Over 90% of participants who engaged as dance members have pursued their college degrees.

Borinquen Dance was featured in an Eastman Kodak Company promotional film for use with the motion picture industry in Hollywood, December 1999. Borinquen Dance Theatre was also the recipient of the 1998 Cultural Organization Award as part of the 15th Annual Arts awards, Arts & Cultural Council for Greater Rochester, Garth Fagan as the Honorary Chair. Nydia received the First About Time Magazine Exemplar Award for Borinquen Dance Theatre in 2001. She was also a finalist for the 2003 “W” Award of the Rochester Women’s Network. Recently received the Nazareth College 2017 Woerner Kollmorgen Award for Community Service among many other awards.

Mrs. Padilla-Rodriguez continues to devote her time and energy to young people through her endless hours of work and leadership she has nurtured and influenced the lives of countless youth and their families.

You can make your reservation(s) and pay with credit card for this Business Lunch by filling in the following form: