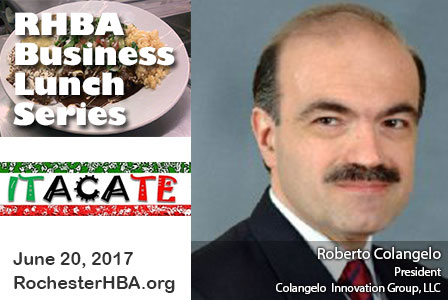 Join us at Itacate-Penfield Restaurant for our June Business Lunch Series with Roberto Colangelo!

Topic: “Going Home: How I found a business opportunity in Latin America from my work in the United States” With career experiences at each of the “Big Three” Rochester companies (Kodak, Xerox, and Bausch & Lomb), Roberto’s path resulted in lessons he applies in his current role as President of Colangelo Innovation Group, LLC.  Come to the June Business Lunch to hear about how Roberto engages professionals in the United States, Latin America and around the world to participate in international business opportunities. Roberto is senior global executive with deep experience in business development, strategy, transformation and results. He has led and influenced major changes of strategy and direction at some of the largest technology and health brands in the world over the last decade; with a unique specialty in creating robust services businesses, he is an original founder of Xerox Global Services.

Roberto’s approach is driven by his unique career; he has been a CFO, GM, CEO, CIO, CTO with major global corporations and has also been an entrepreneur forming companies with shareholders such as Oracle, Cisco, Bausch & Lomb and venture capital firms. The scope and breadth that he brings to challenges is rare in today’s specialized world, where he unifies technology, finance and sales into results.

He is currently president of Colangelo Innovation Group, LLC, a venture formed in 2007 to identify technology-based business development opportunities between the U.S. and Europe and Emerging markets, especially Latin America, where he has been involved in some of the largest government modernization projects of the last decade.

He is former vice president of global technology and offering development for Xerox Global Services and is an original founder of the business. Xerox Global Services was a $3 billion division of Xerox Corp. dedicated to helping clients improve document- driven processes, making their business more efficient and secure. Roberto was responsible for identifying, developing and delivering technological innovation for all Xerox Global Services lines of business worldwide. He was the creator of the award- winning Smart Document Initiative.

Prior to that position, Roberto served as vice president of global development and delivery for Xerox Global Services, where he was responsible for worldwide service offering development and implementation of client revenue projects with responsibility for 1200+ consulting and technology employees worldwide.

He previously served as president and chief executive officer of VisualPlex Corporation—an E-commerce venture created to develop a common interoperability technology and process infrastructure for the vision care industry in partnership with Bausch & Lomb and venture capital. The venture raised $50 million.

Roberto also served as senior vice president and chief information officer, and corporate officer with Bausch & Lomb in Rochester, NY. Prior to that position, he was Bausch & Lomb’s vice president CFO for the $2 billion Global Vision Care business and general manager for subsidiaries in Venezuela, Colombia & Ecuador. Prior to joining Bausch & Lomb, he was assistant vice president of finance for GD Searle Pharmaceuticals in Argentina and worked as a consultant and auditor with Price Waterhouse in Buenos Aires.

In 2005 and 2006, Hispanic Engineer Magazine named him one of the 100 most influential Hispanics in technology. Winner of the Xerox Innovation Award in 2006.

Colangelo is a former board member and secretary of COMPEER, WXXI Public TV and St. John Fisher College. He is a licensed soccer coach and led his Rochester Futbol Club team to the 2009 NY State Championship.